The studio is currently looking pretty tidy. It won't last long, but I am feeling very proud of it right now. Dan hung the Marcelle Medallion on the chimney breast for me, and it looks fantastic. That corner is generally a bit gloomy, and it looks so much better now. I dusted and rearranged nearly everything in the studio yesterday for extra pretties. The Blythe dolls look a lot happier with a bit more breathing space. 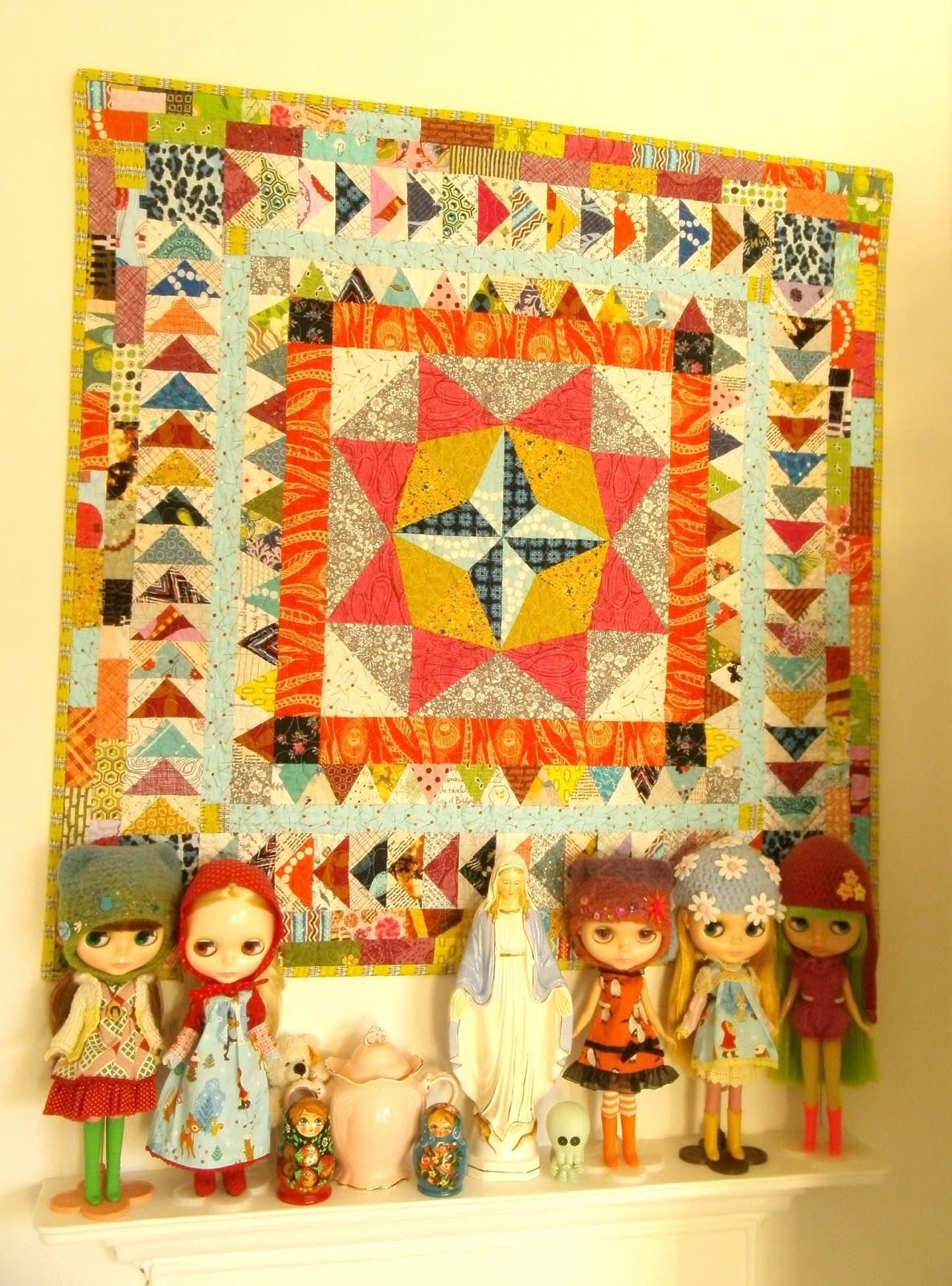 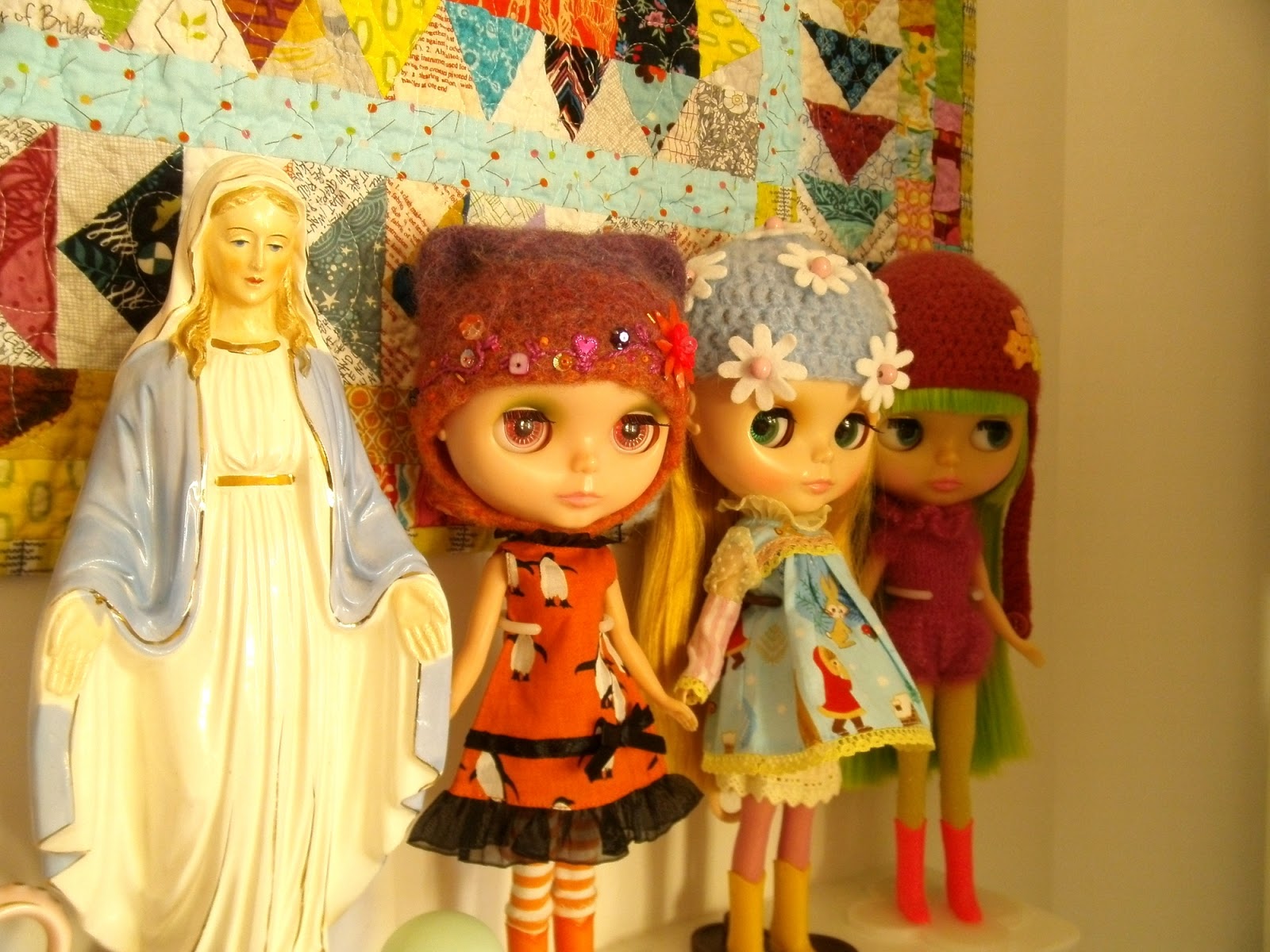 Here we have Mary (Queen of Heaven), Providence Candy-apple, Marzipan Dorayaki and Jellybean. 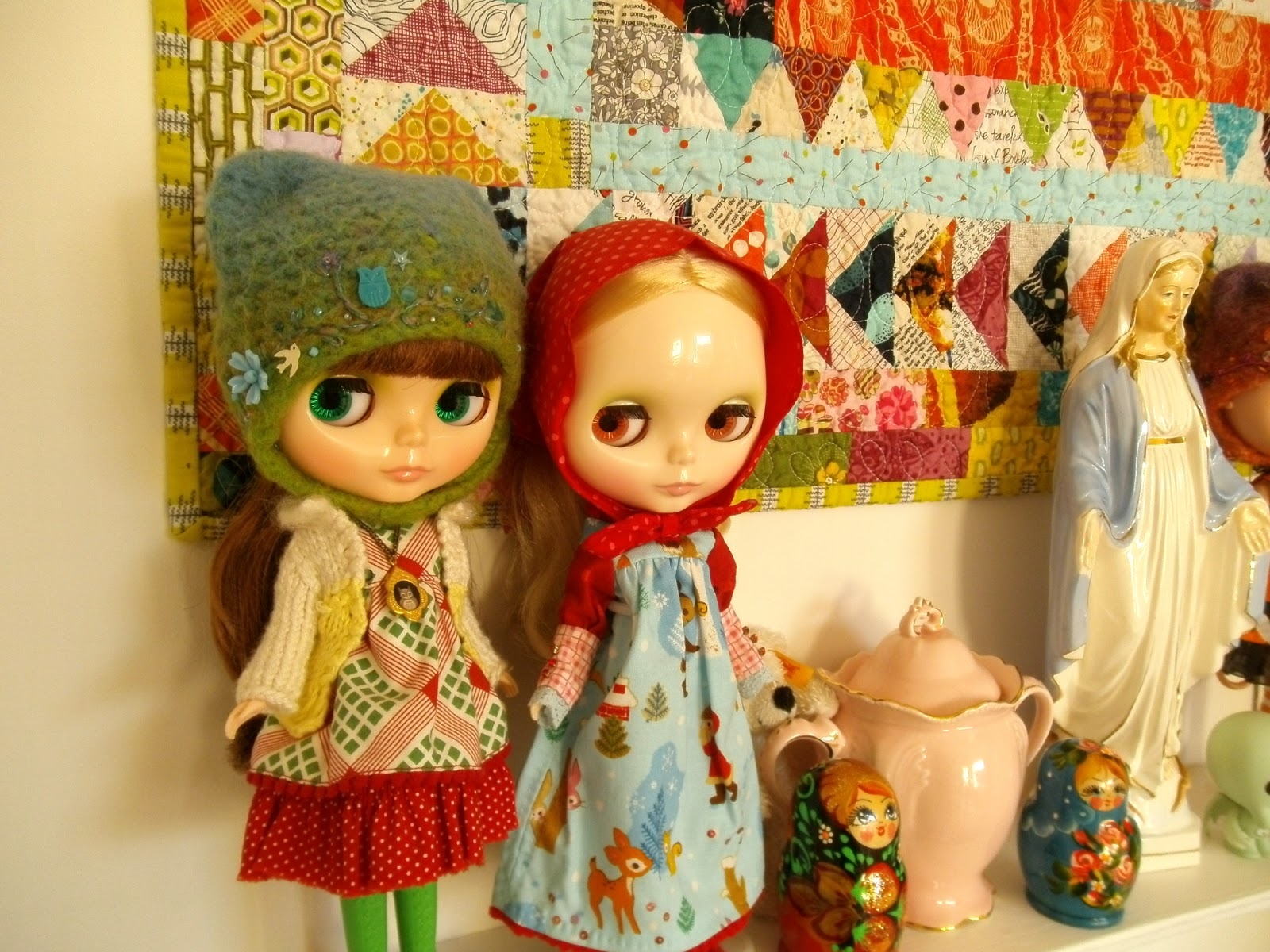 The expedit holds most of my Blythe hoard and my fabric stash, as well as craft books. magazines, some of the yarn and bedlinen. On top lives my quilt stash, fabric scrap bins, dolly clothes in cute metal lunch-boxes, and my batting stash. 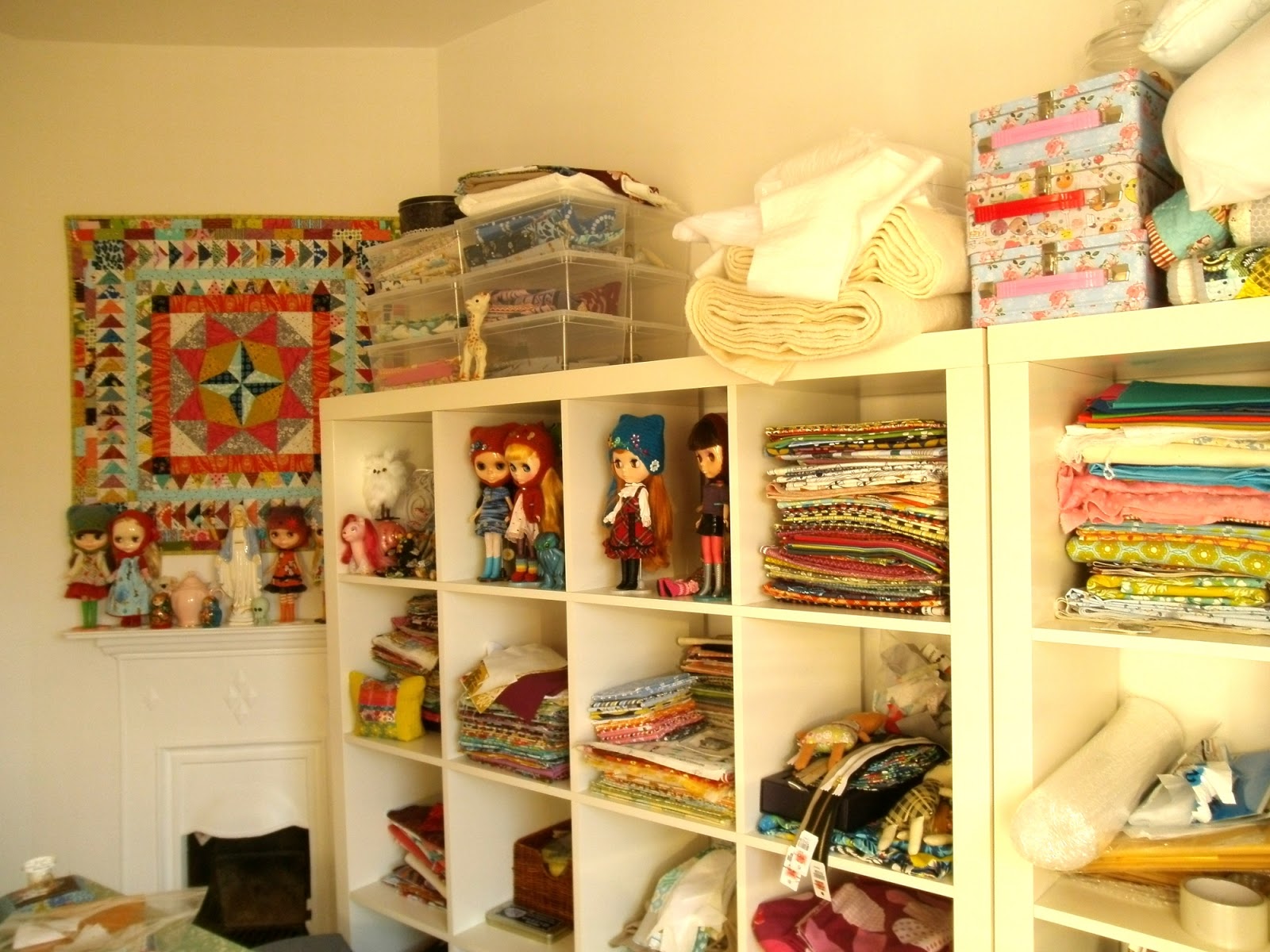 I spent last night stitching up some happy patchwork panels. I am *attempting* to make an Aeroplane Bag using only materials I have to hand. 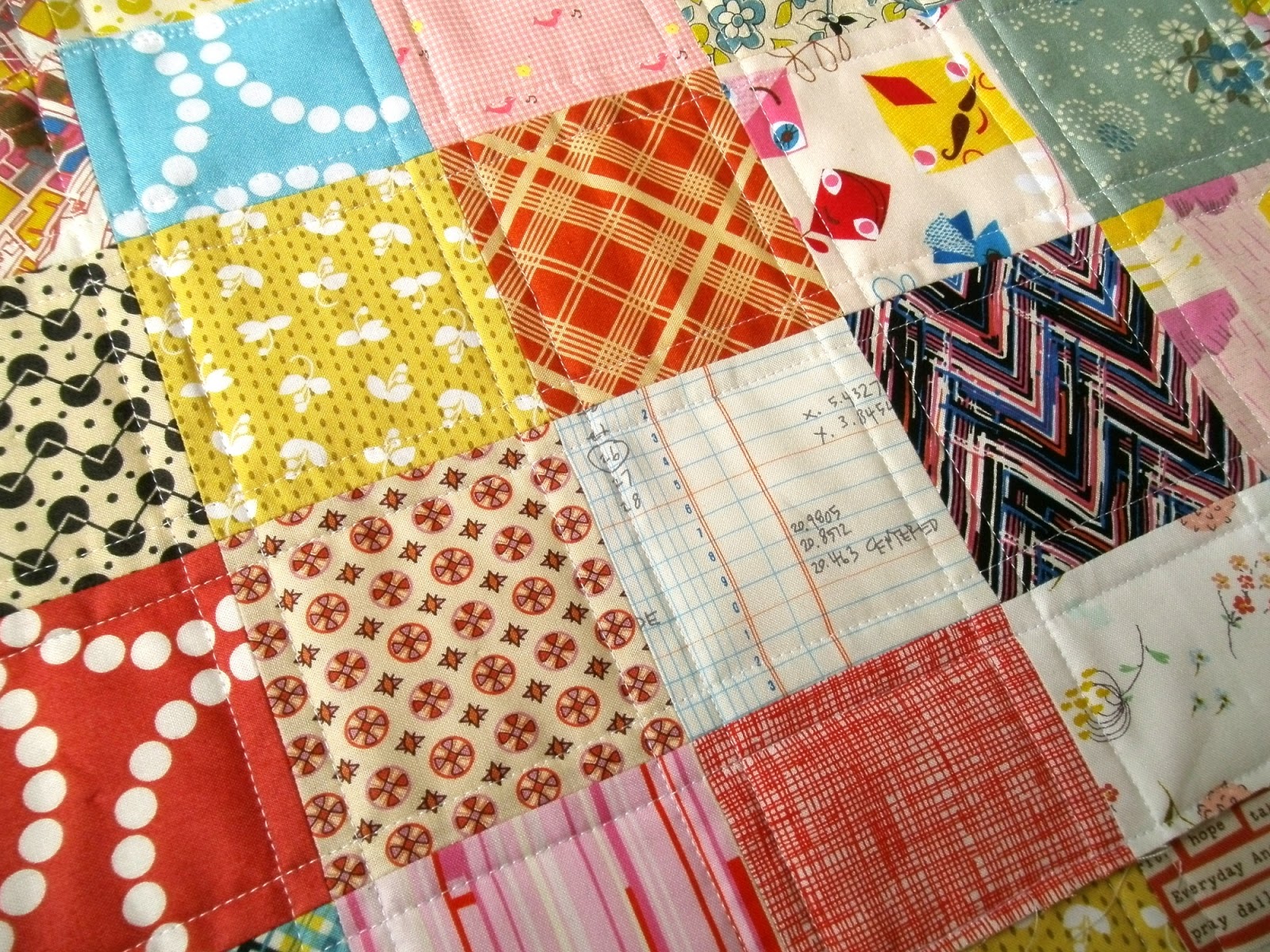 I love the idea of the soft and stable the pattern suggests, but I can't find any I can afford right now after shipping costs. And I'm dubious about the car upholstery foam alternative (totally unfounded dubiousness, I have not actually poked any, I'm just worried it will have a weird chemically smell and I dislike its grey colour.) So I made my main exterior panels from patchwork, which I quilted with warm and white batting and a layer of calico before trimming them to fit the pattern piece. 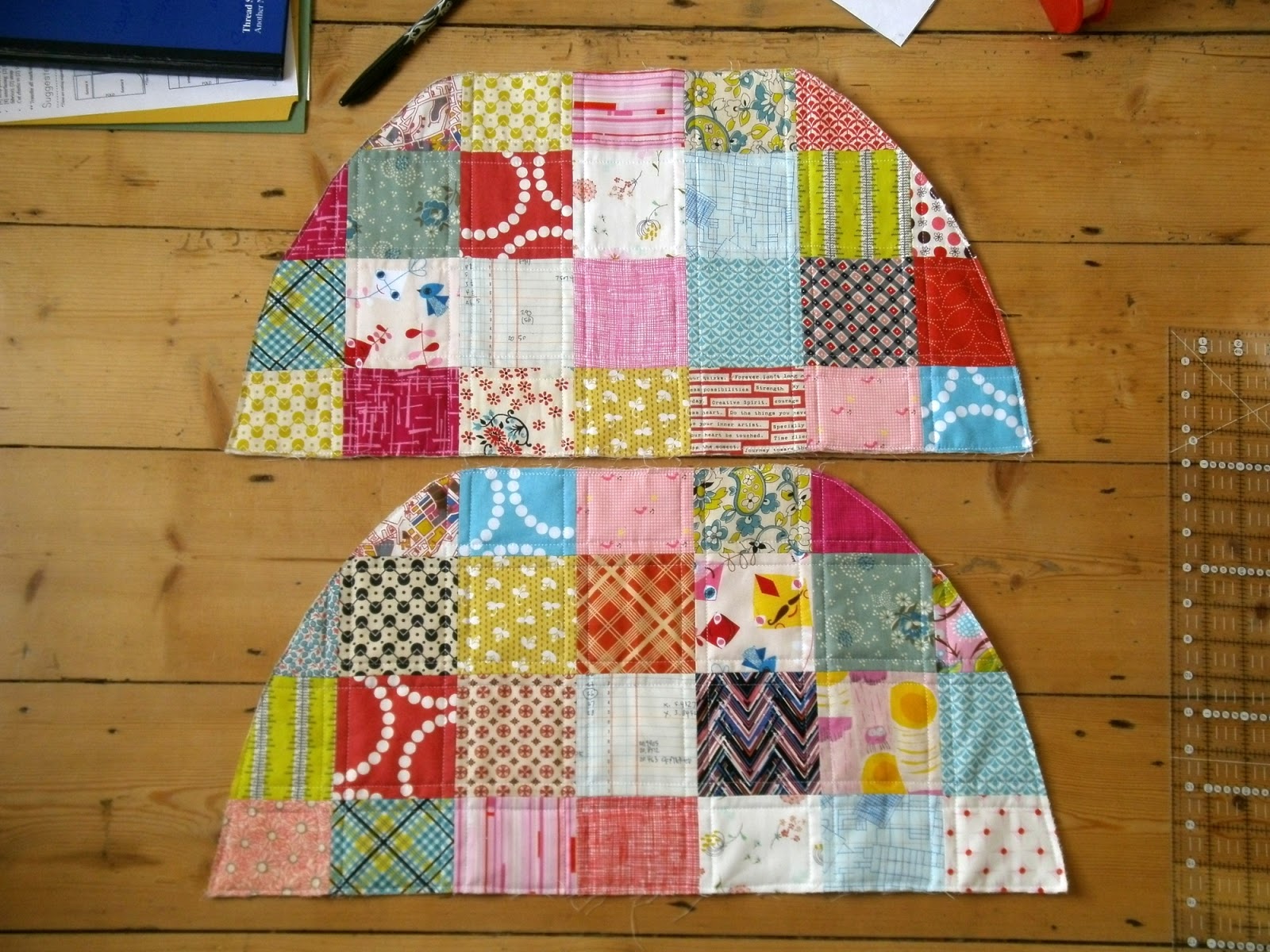 I will be using the suggested peltex interfacing for the bag base. Hope to cut the rest of the pieces later today. I'm also planning to change the zip installation a bit as I want to use a 22" metal zip I already have. I really really hope it works!
Posted by teacupfaery at 09:54 1 comment:

I have spent the last few weeks practising my free motion quilting skills. As a direct result of this, languishing quilt tops are finally being pulled out and finished. If this productivity continues  I may one day reach the point of having no WIPs! That really is very unlikely though. But I did finish three whole quilts this month, and managed to take a few photos this weekend.

First up is the Scrappy Trip to the Seaside. A scrappy trip quilt in low-volume seaside colours, made with blocks from members of the do. Good Stitches Care Circle, then quilted and finished by me. I chose a chevron-ish layout because I liked it best, and it's what I would have chosen if I had made my own scrappy trip quilt. Which I might just have to do now. I quilted it in happy little free motion loops, using the rows as a spacing guide, so no marking required, hurray! The back is a neutral cotton solid and binding is mostly Kona Caribbean, with a few aqua scraps pieced in for a bit of extra interest. This quilt is destined for Siblings Together and will be dropped off at the Fat Quarterly London Retreat this July. 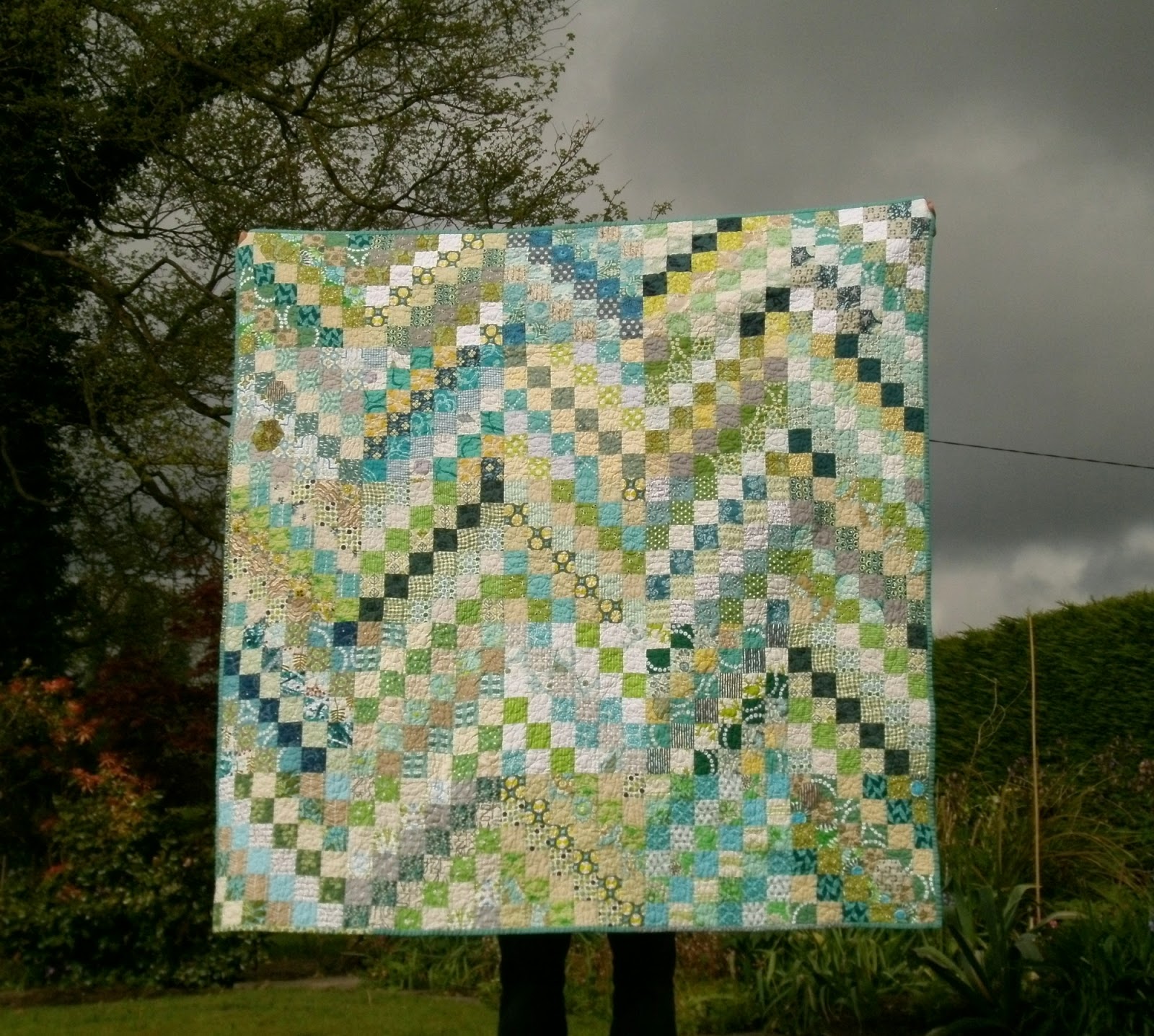 Next up, a slightly smaller than planned Marcelle Medallion. I burned out and couldn't handle any more borders, so decided to finish it as it was. Conveniently enough, it fits perfectly on the chimney breast wall of my studio, where it has already been installed. I'm having an epic tidy-up in there today and will hopefully have pictures to share soon. 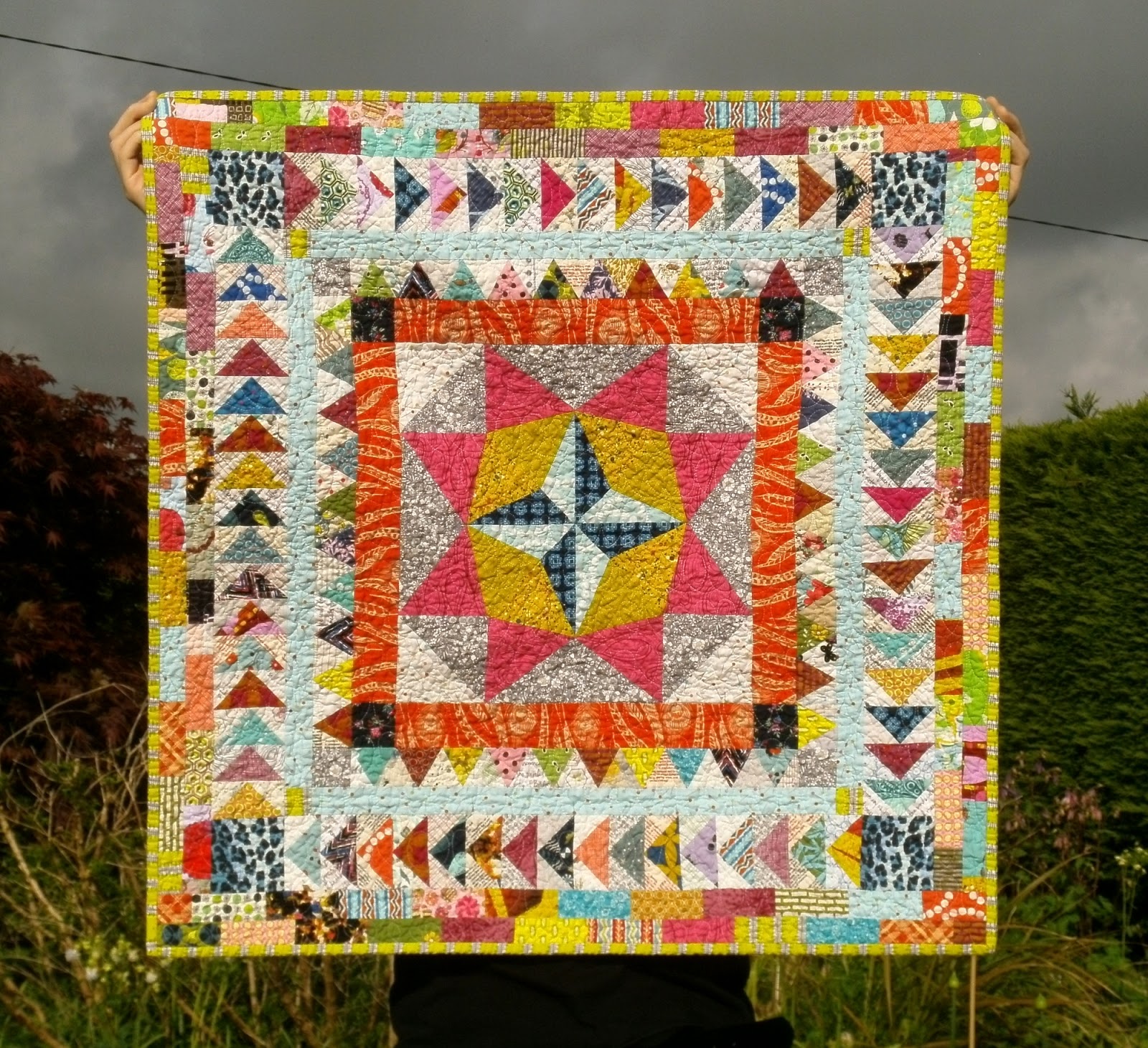 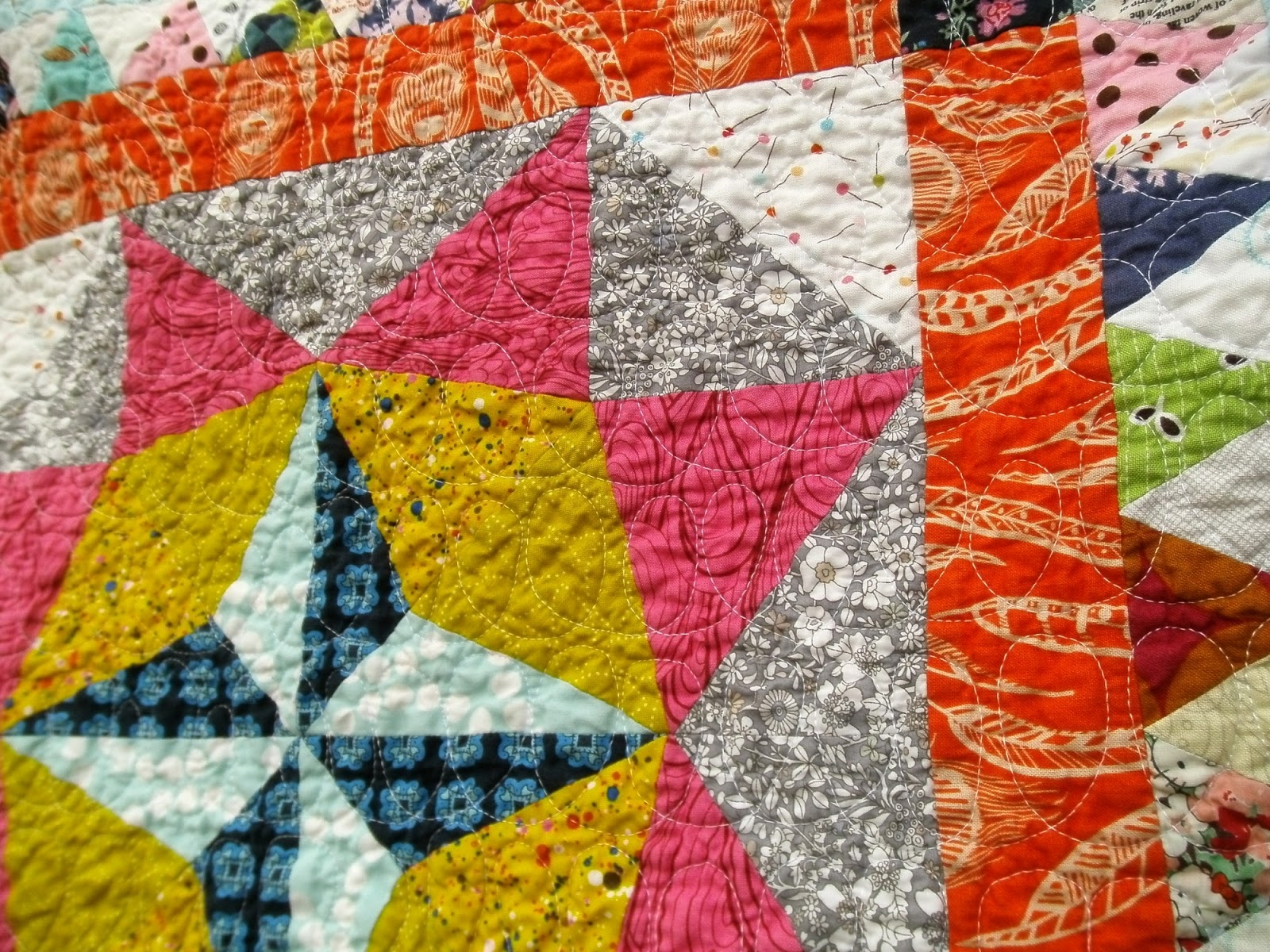 Last up is a quilt I feared would never see the light of day, my second Scrap Vomit. I lost interest in this quilt for several months, but finally finished the top this spring. It is the first quilt I free motion quilted and it made a great learning curve project. My lack of emotional attachment to it made the quilting a lot less daunting! Now that it is finished, I actually really like it. But I have only limited quilt space in my home and so many plans for future projects, so this one has gone to live with my parents. 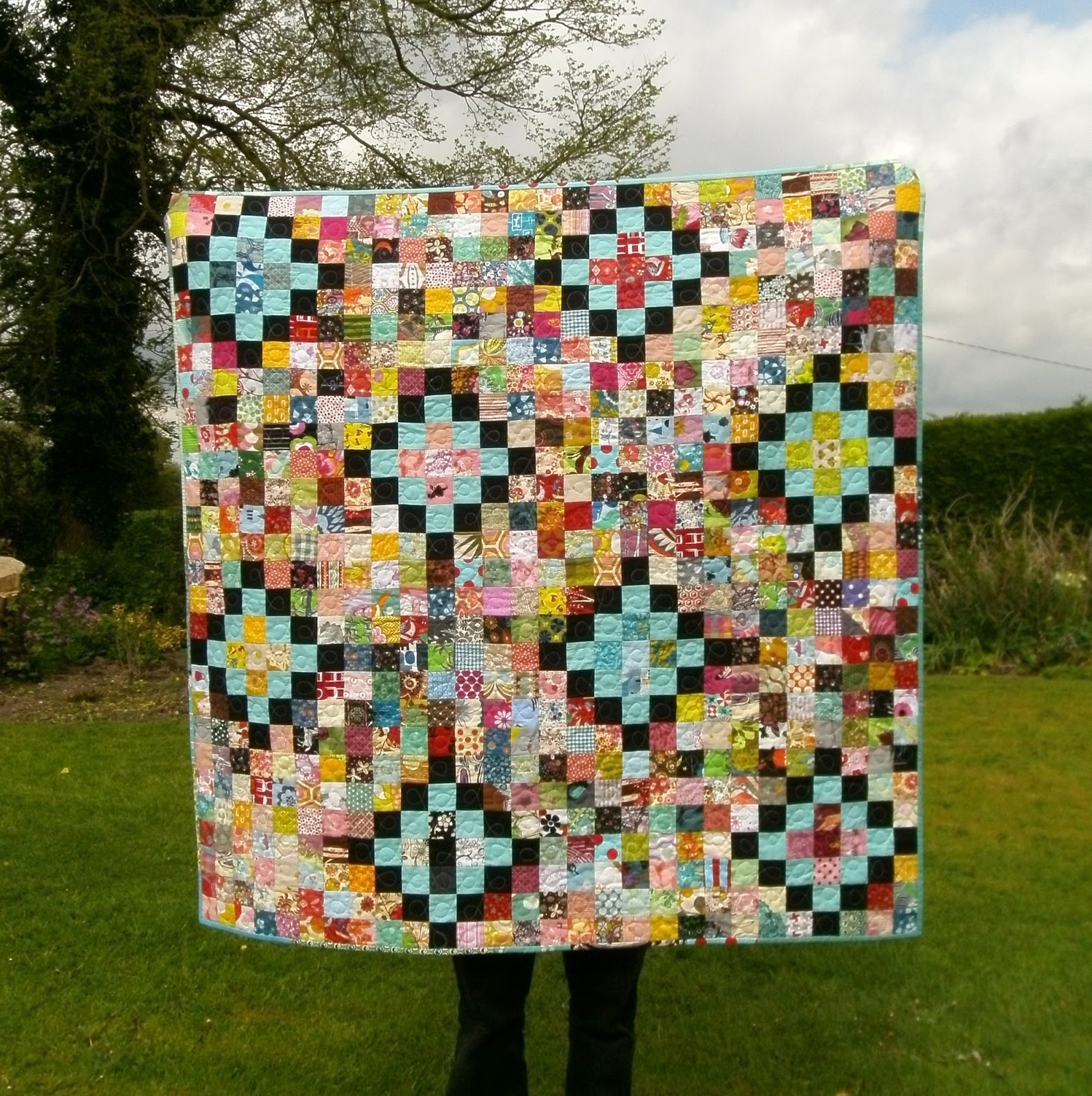 On Monday I will be travelling to Dublin to the see Dan Brown. Most of my time this week has been spent on a rather exciting adventure with Robert Langdon. I'm not quite done yet, but hope to finish reading Inferno by this evening. I was really missing my blog though, and thought I should pop in to say hello. I'm vaguely aware that someone out there might be stalking me for Fat Quarterly Retreat related reasons, and I want them to know I'm still out here. Hello! 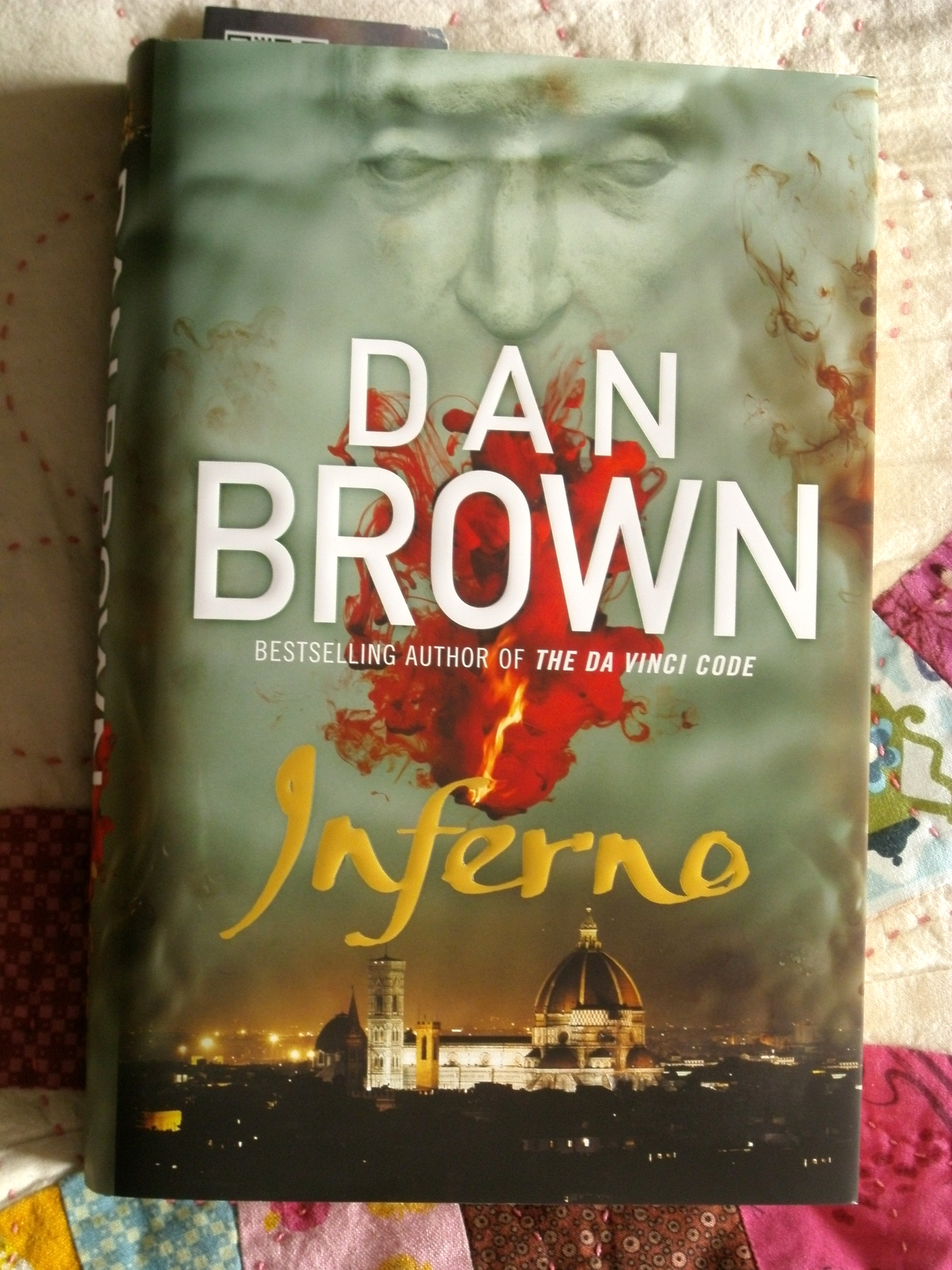 I have also set myself a short term goal of one finished object a week, for the run up to the Fat Quarterly retreat. This week I made myself a travel sewing kit for my tools and hexy kit. I used some hoarded Heather Ross prints (part of operation 'use all the fabrics') and some co-ordinating neutrals from Jenean Morrison's 'In My Room' collection. Binding is Sketch in coffee. 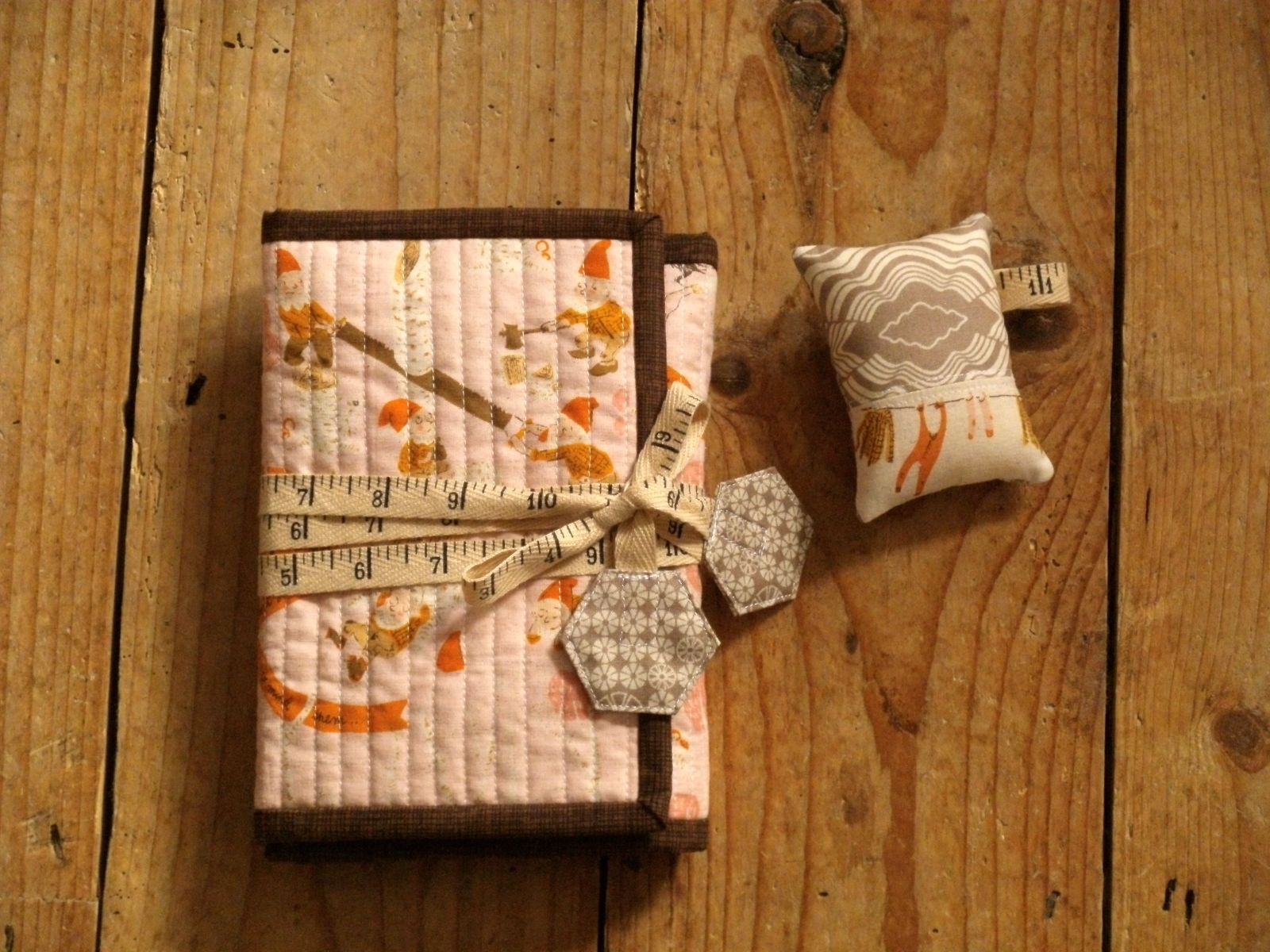 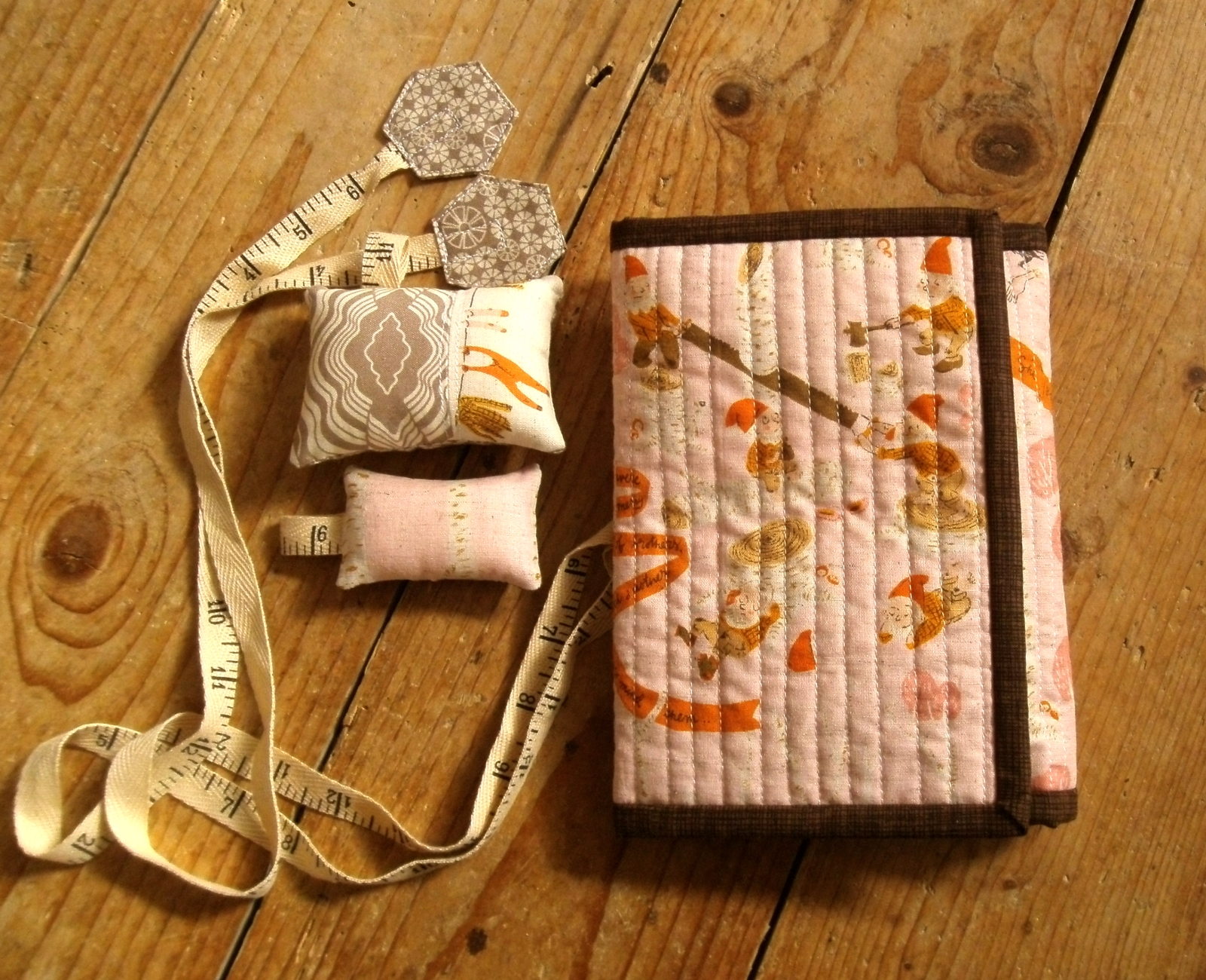 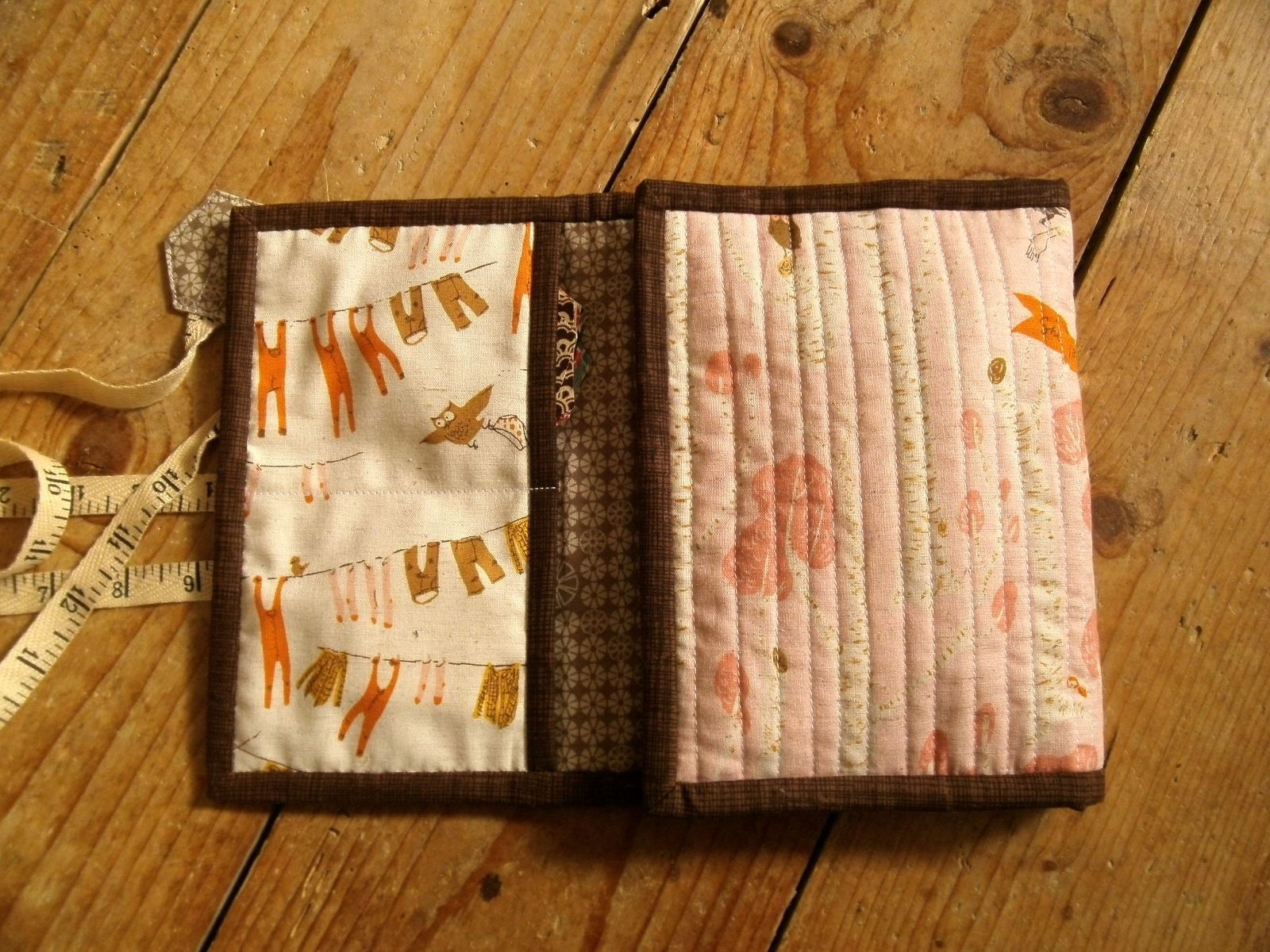 I used this travel sewing kit tutorial as a starting point. My main pockets and construction are the same, but I really wanted to incorporate a zip pocket, so my sewing kit is a bit bigger than the original to accommodate this. It measures approx 8" tall by 18" wide fully unrolled. I am completely in love with it and so glad I was brave enough to use those fabrics. Cannot wait to take it on a trip with me. 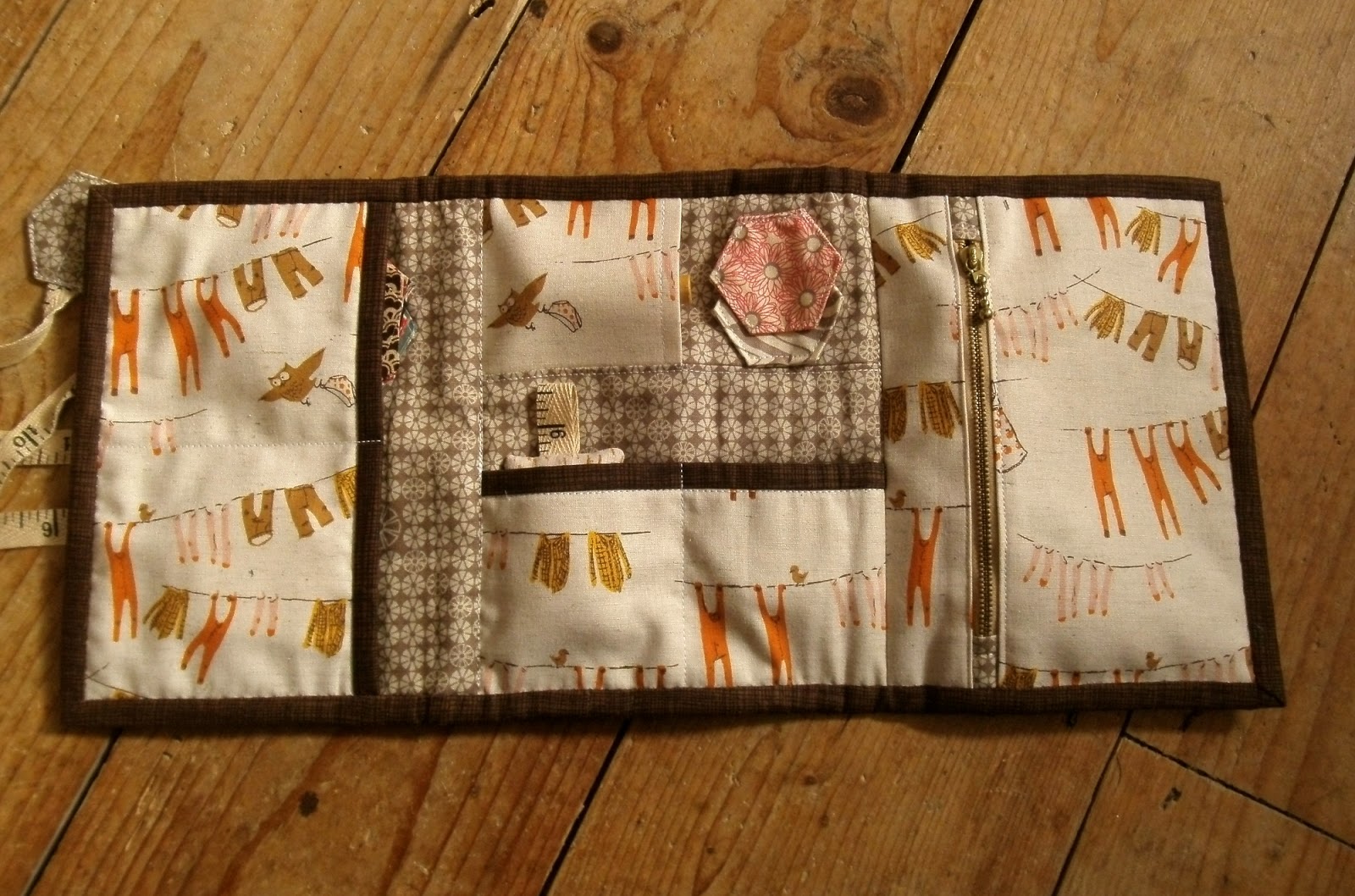 I have also *almost* finished the do. Good Stitches Care circle quilt for Siblings Together. Just need to finish sewing down the binding and add labels. This quilt will be travelling to London with me in July to be delivered to the Siblings Together team. 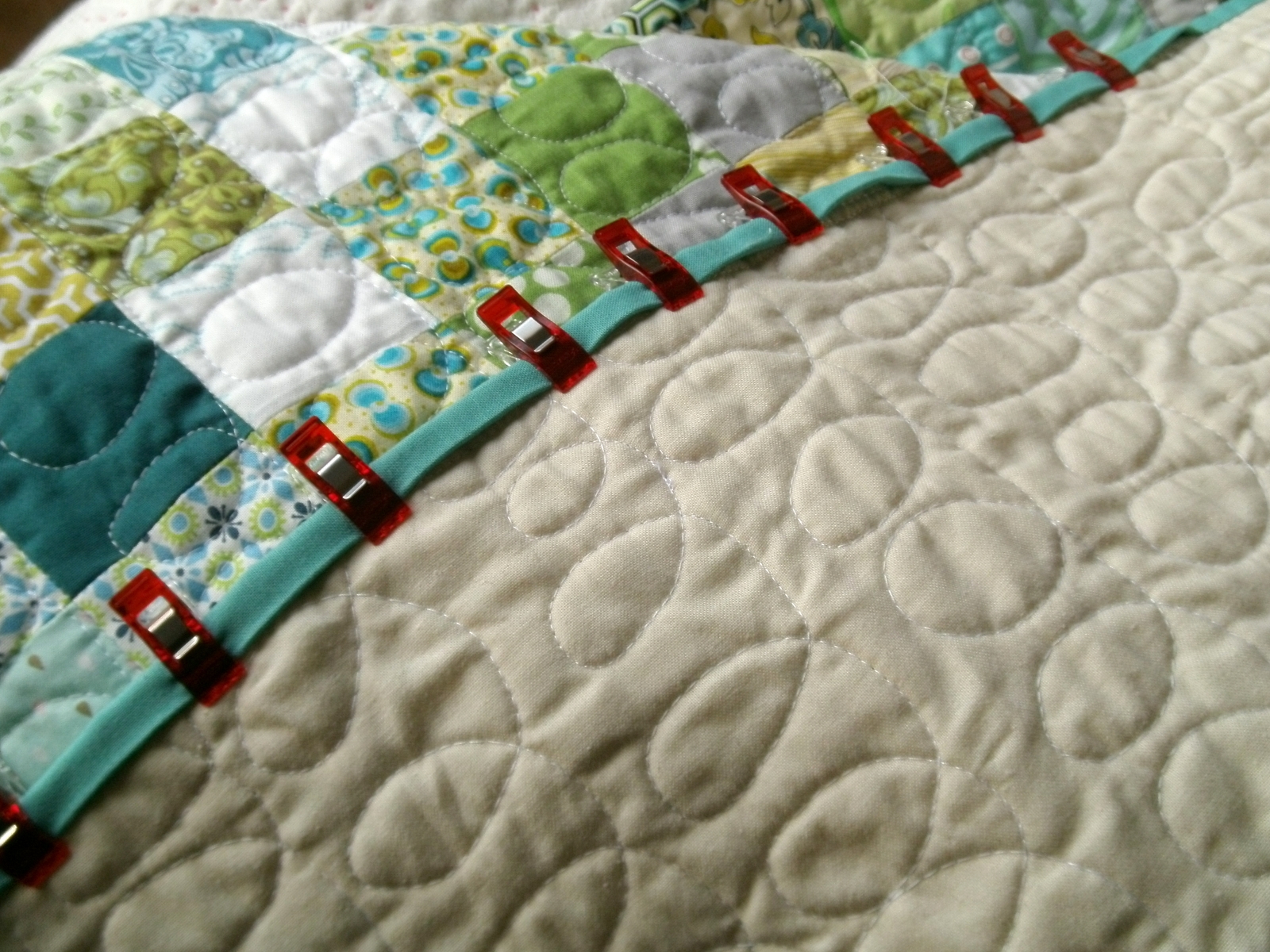 Once I return from Dublin, I'll be getting on with my FQR name tag swap, my sample swap sewing kits, and a super tote for me.
Posted by teacupfaery at 10:28 1 comment:

I have been meaning to blog all weekend, but haven't managed to find a moment. Lots of posts, half written and in my head. So I am making five minutes for a catch up session. I have a terrible habit of always trying to do all the things at once. Since sitting down to type I have run off to hang the laundry, decided to make bread, run down stairs to put the oven on, remembered I still need to wash the dishes, abandoned oven pre-heating, to run back upstairs to put the hot water on for said dishes. I'm always busy, always in the middle of something, but I really feel that I need to be. I like to have a purpose, like life is a video-game where every artefact I pick up leads me on to the next puzzle.

This weekend I made guacamole. From scratch. For the first time ever. 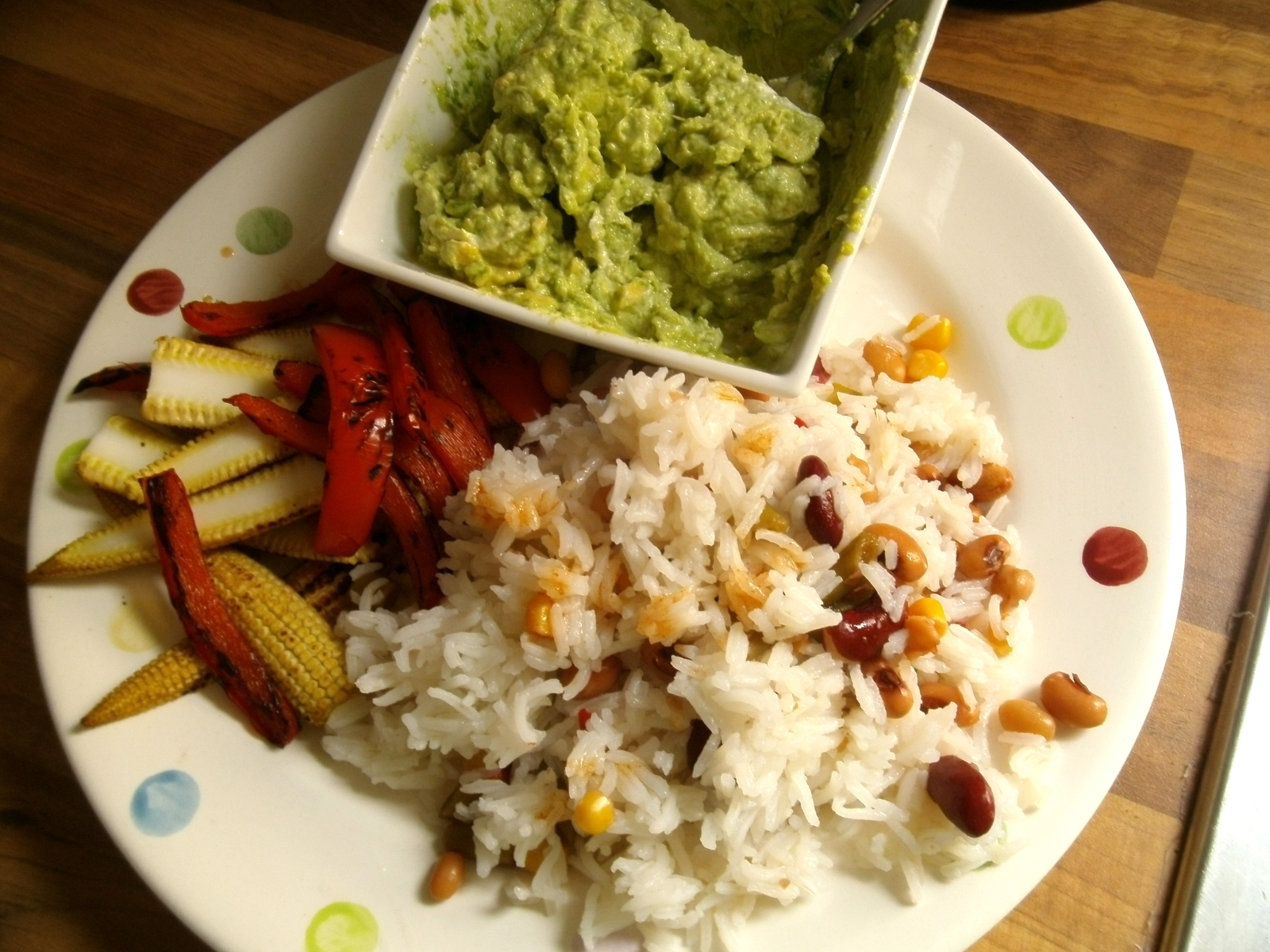 It was Saturday. I was home alone. Dan was at my parents  playing Rouge Trader RPG with my brother and their usual parents house posse. And somehow, I made the best dinner ever. The guacamole involves avacado, goats cheese, lime juice, salt and pepper, and a dash of hot sauce. I was, as always, inspired by Joy the Baker. I used lime instead of lemon for the guacamole, as it felt right. And I'd already eaten all the japapenos, so hot sauce totally worked. The peppers and baby corn were cooked by grilling on a very hot dry griddle pan, and I made rice and added a can of cooked mixed beans, a dash of lime and called it salad. Dinner done.

I made a slightly edited version for Dan and me the next day, with jalapenos in the guacamole and nacho chips to serve. Duplicate two day dinners is what happens a lot around here. With just two of us it's mostly easier to buy ingredients and cook the same thing twice, or make enough for two days on day one. Only cooking every second day is where it's at. And I hate to waste anything. Currently I have some goats cheese dregs, so tonight's plan is a gluten free pizza base with baby tomatoes, pesto and goat's cheese. One dinner leads to the next, my video-game analogy in practice again. Left over pesto and baby tomatoes will most likely develop into some sort of pasta thing on Wednesday.

Another busy week this week. It is the RTE drama festival in Athlone this week. We will be at the Wednesday and Friday night plays. I'm working away on my do. Good Stitches quilt. The top is almost done, and I hope to get it finished and basted by tonight. I also have a date with the passport photography man in the local photo shop. I am not looking forward to that, but really need a new passport so I can fly to the Fat Quarterly Retreat in July. And it is only a few days until Dan Brown's Inferno release. I have exactly 6 days from release date until my Audience with Dan Brown/Robert Langdon lecture in Dublin. So next week I will mostly be reading. I'm re-reading The Lost Symbol currently. On track to finish before next Tuesday. I feel a bit bad that I didn't get time to fit Angels and Demons in my Robert Langdon recap session, but quilting took over and I failed to stretch the laws of time sufficiently.

Running to do dishes and bake bread now.
Posted by teacupfaery at 11:46 No comments: 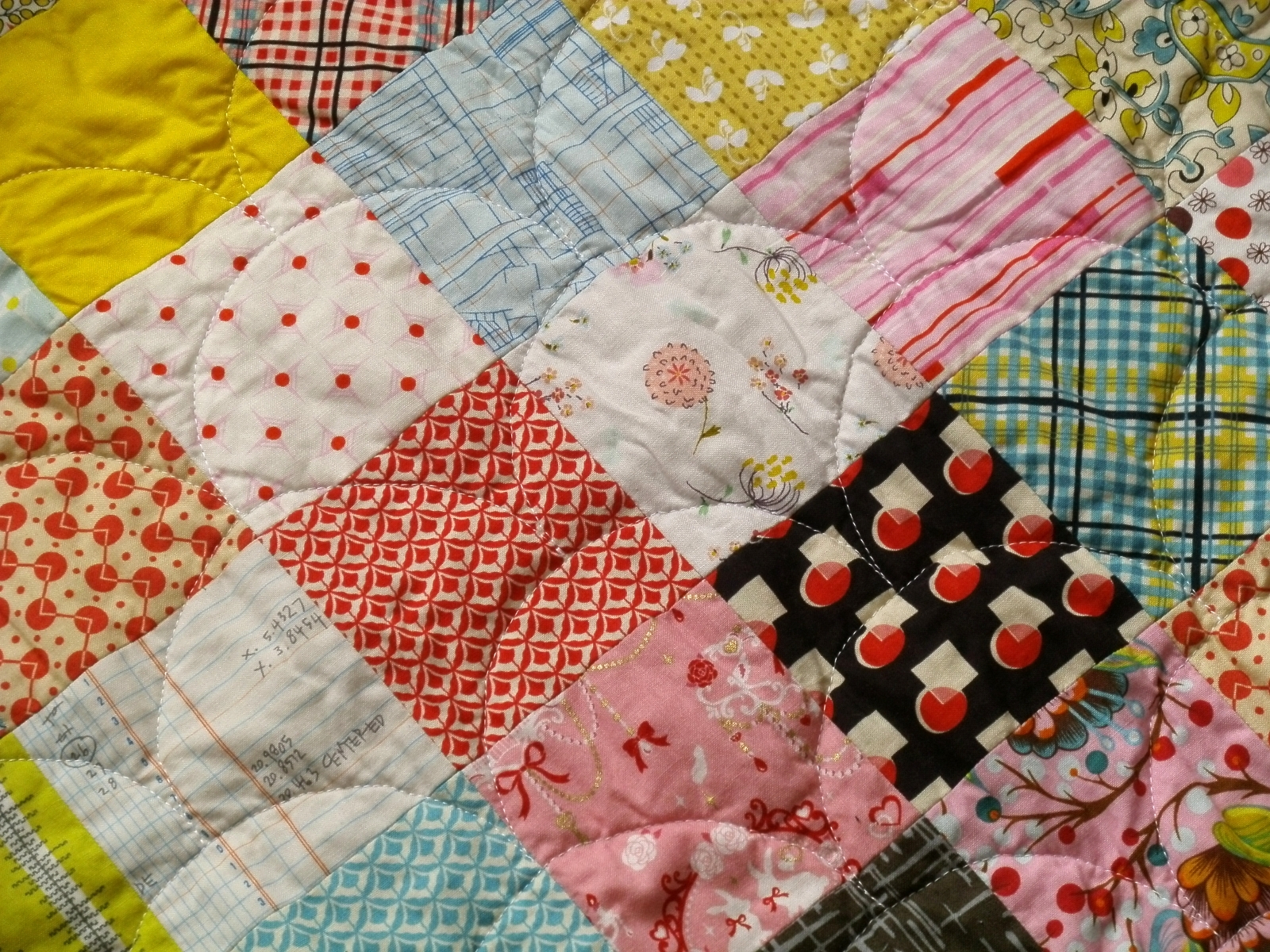 Lately, I have been entirely obsessed with ice-cream sundaes, milkshake parlours, anything involving vanilla, whipped cream, chocolate sauce and cherries on top. I mostly blame Joy the Baker. Her happy hour hot fudge milkshake totally inspired this colour palette. I still haven't actually make the milkshake, but I have finished the baby quilt, and I have an ongoing hexy project in these fabrics in progress. 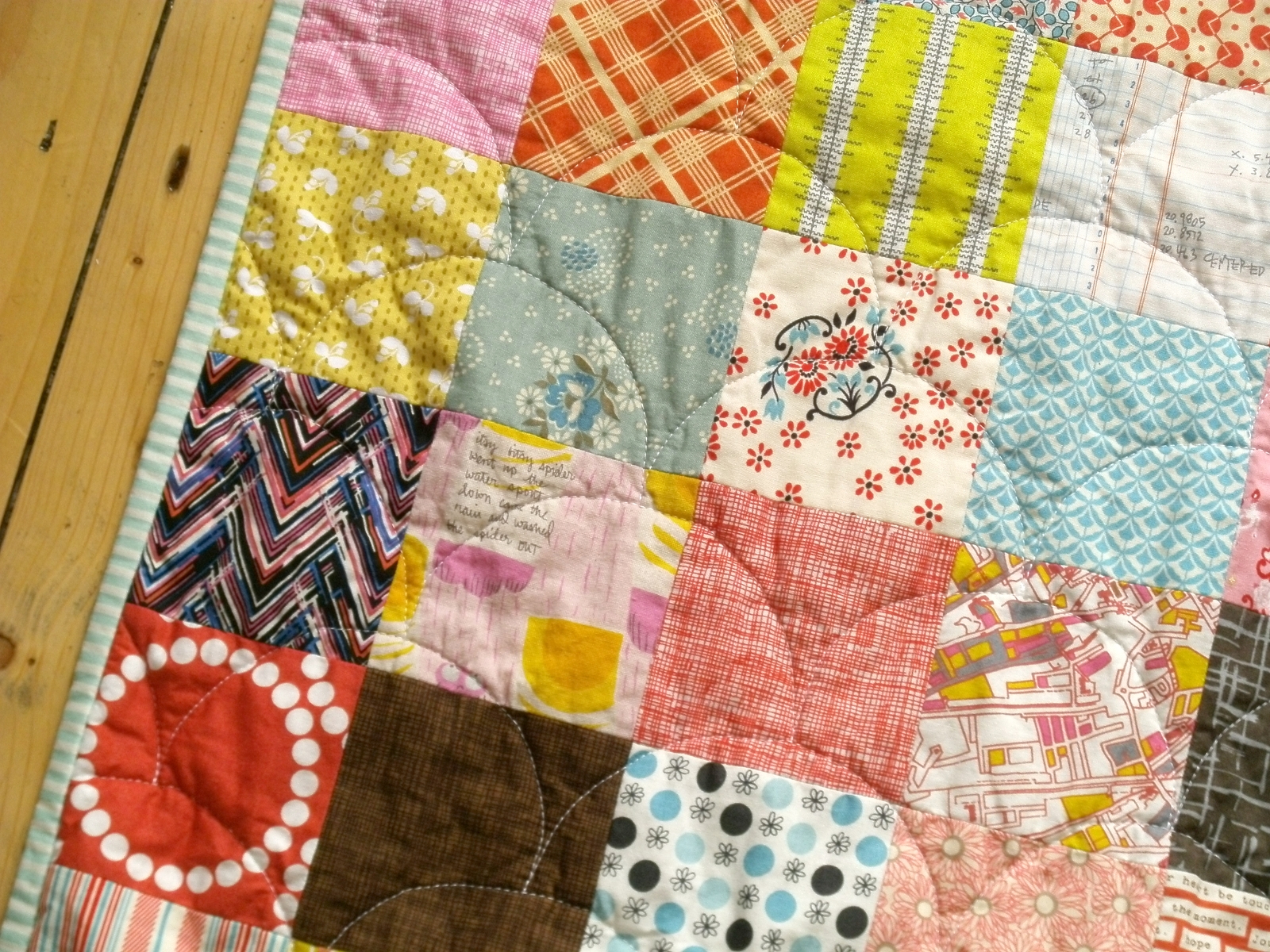 The ice-cream sundae baby quilt is made from 4" squares in a variety of raspberry pink, cherry red, sky blue,  vanilla and chocolate brown fabrics. With just a touch of electric-banana citrine. I used lots of favourites, and will definitely be revisiting this palette again soon. 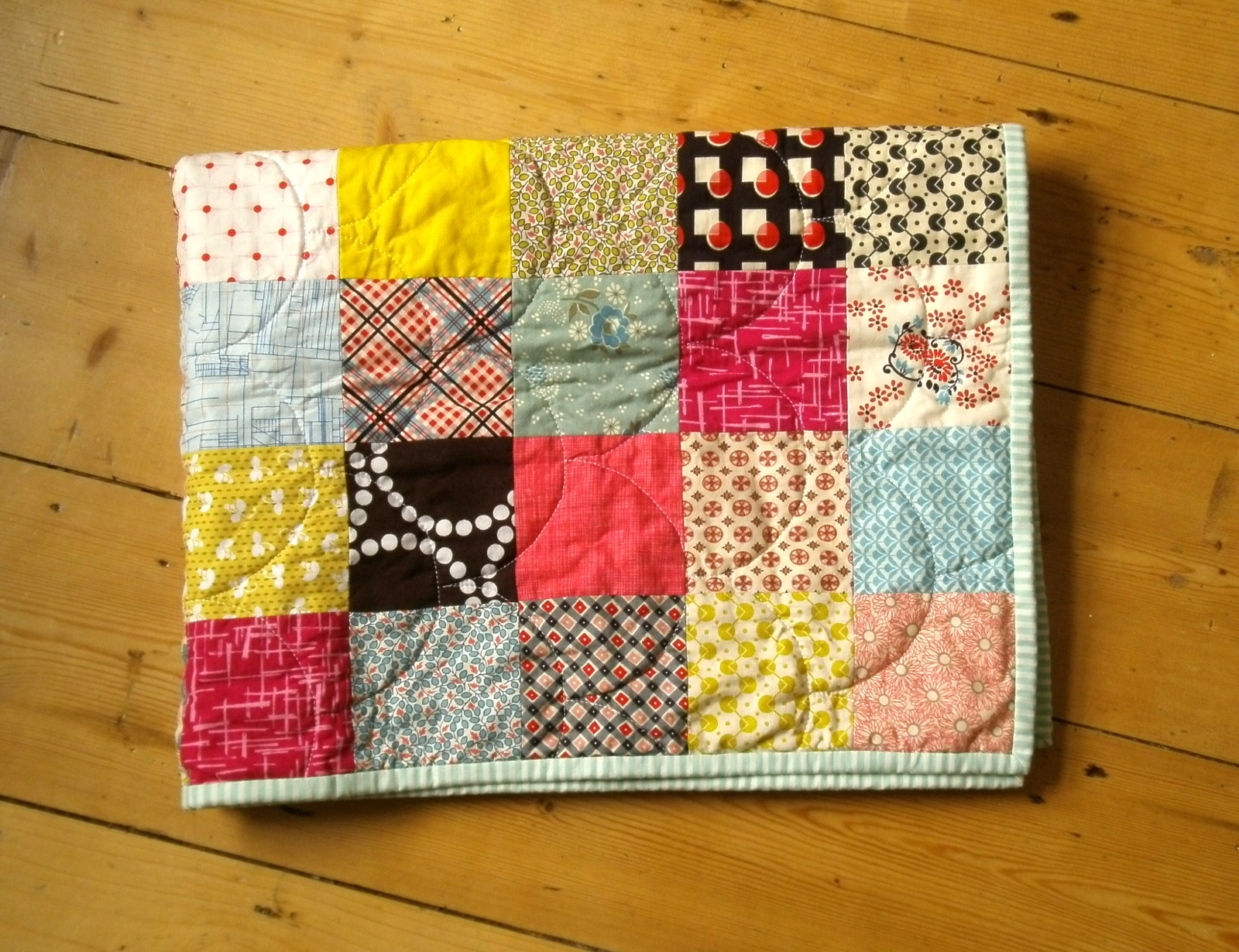 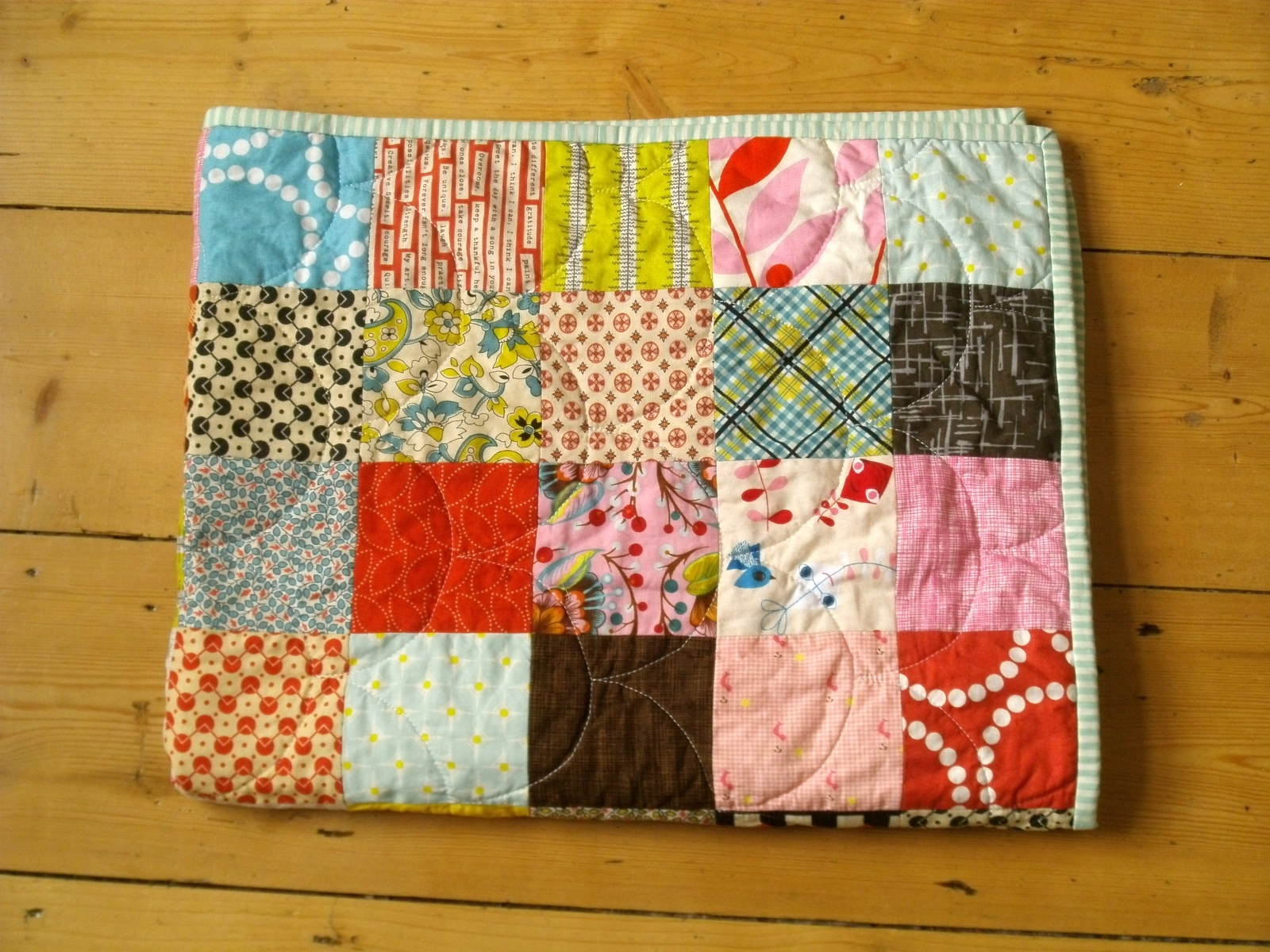 I quilted this little quilt in a clamshell pattern using my walking foot. I'm pretty impressed by how it turned out. It was a bit tricksy to quilt curves this way, but my free-motion quilting isn't quite up to scratch yet. Quilting (and piecing) thread is aurifil 50wt in white. I used warm and white cotton bating. 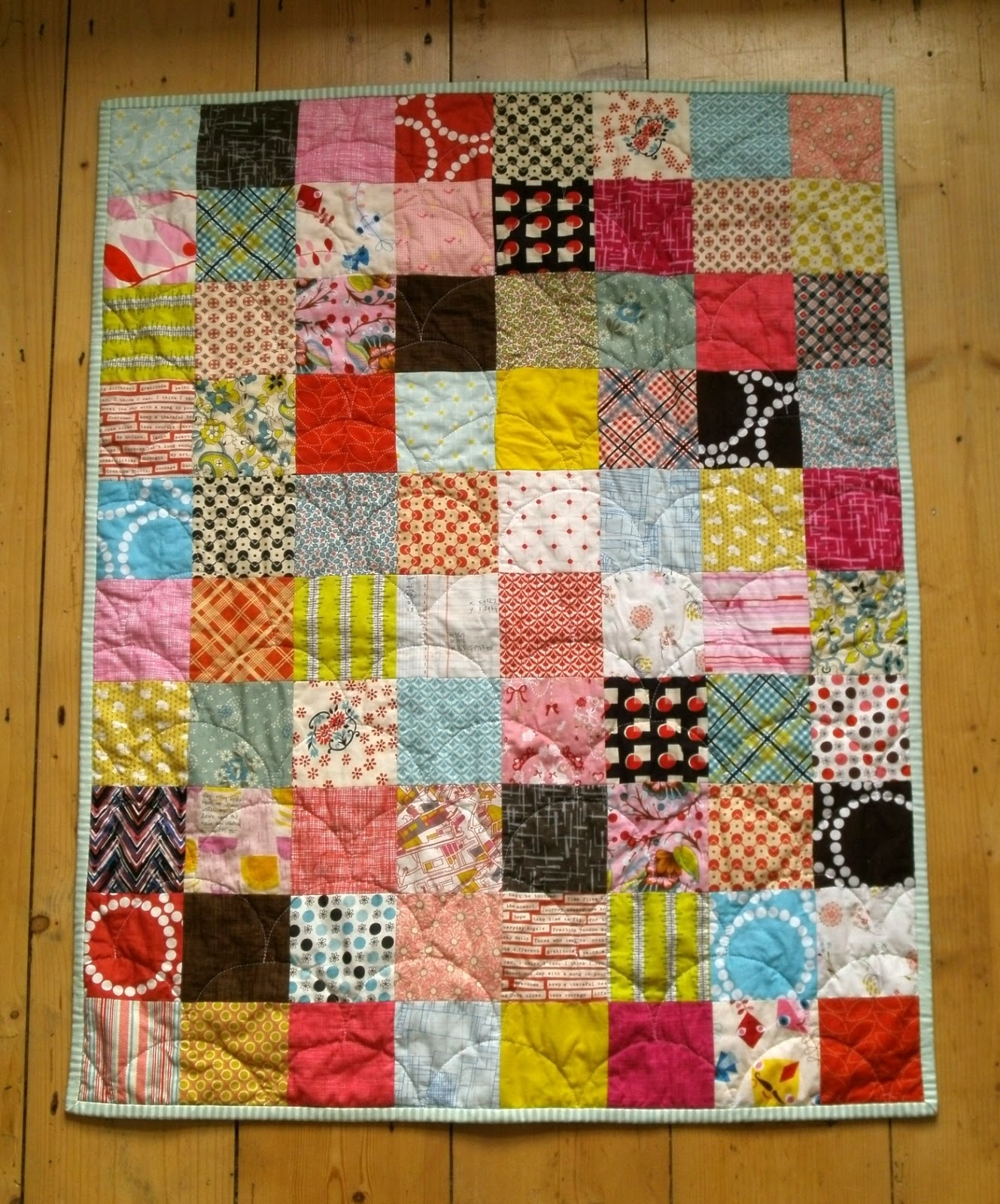 Quilt back is mostly Moda Bella Solid in natural (a perfect vanilla ice-cream neutral) with a strip of patchwork in the fabrics used for quilt front. 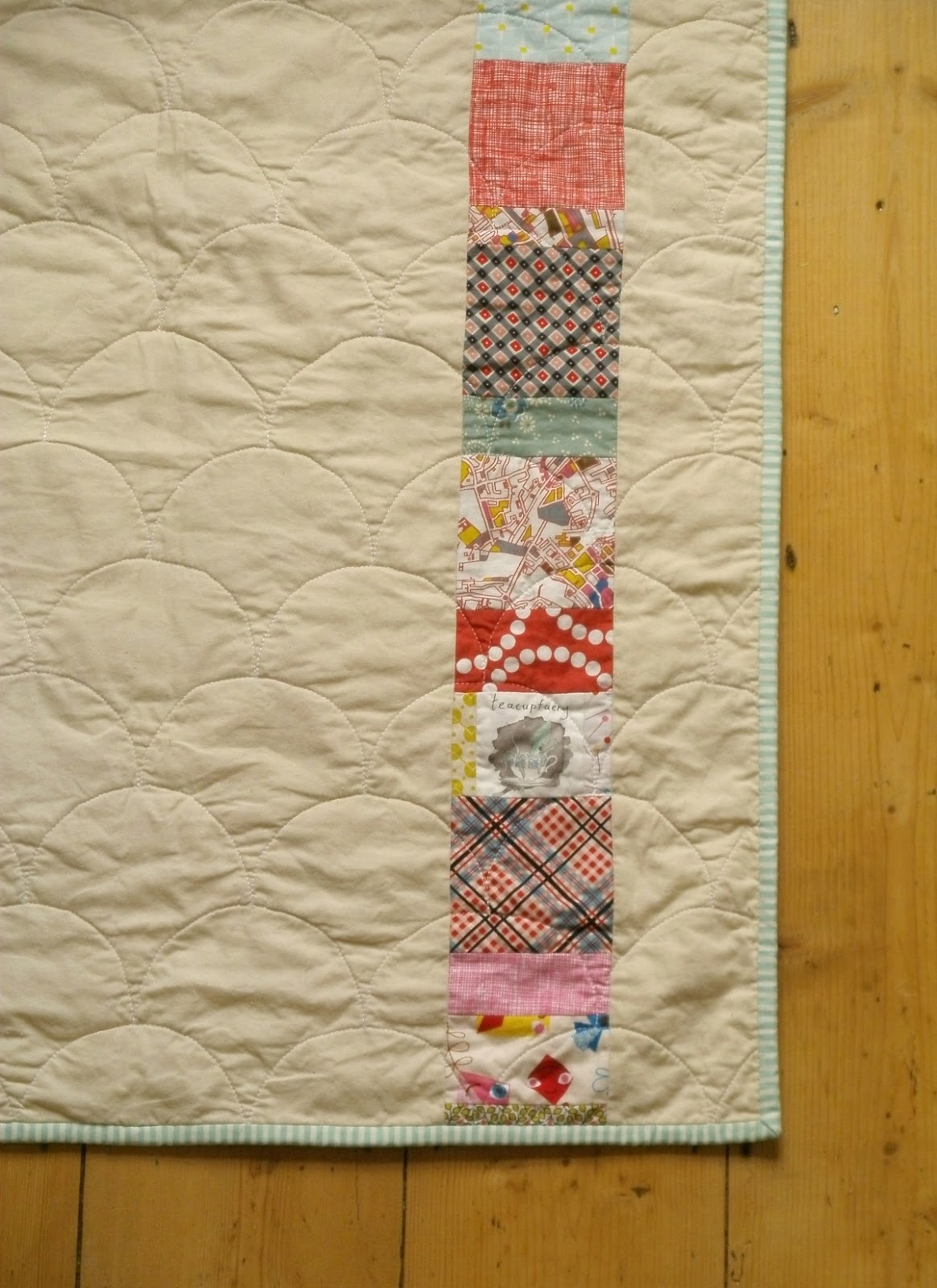 Ice-cream sundae quilt is available here.
Posted by teacupfaery at 09:44 No comments: 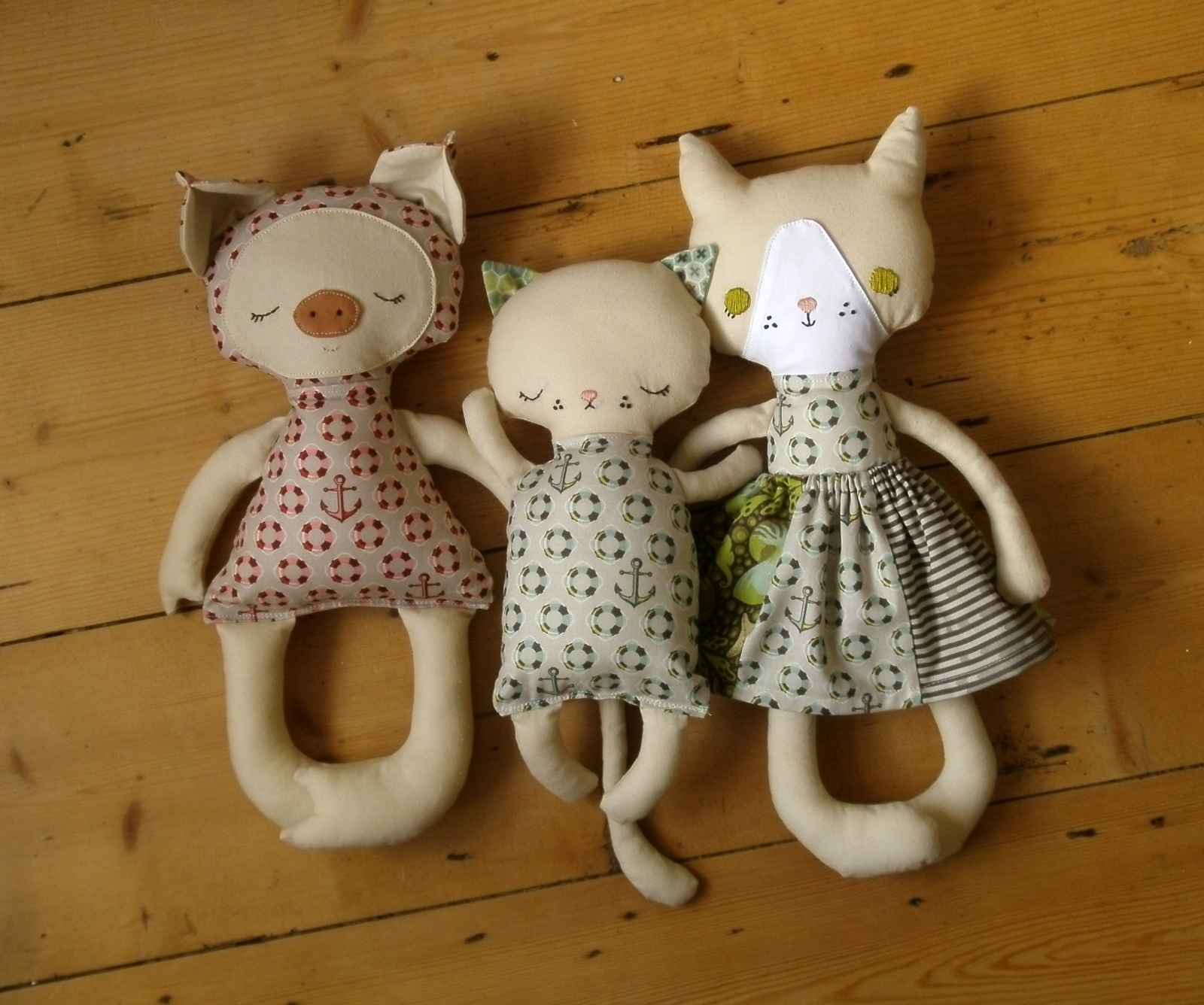 Meet the Salty Crew! A bunch of nautical plush creatures up to general mischief on the high seas. 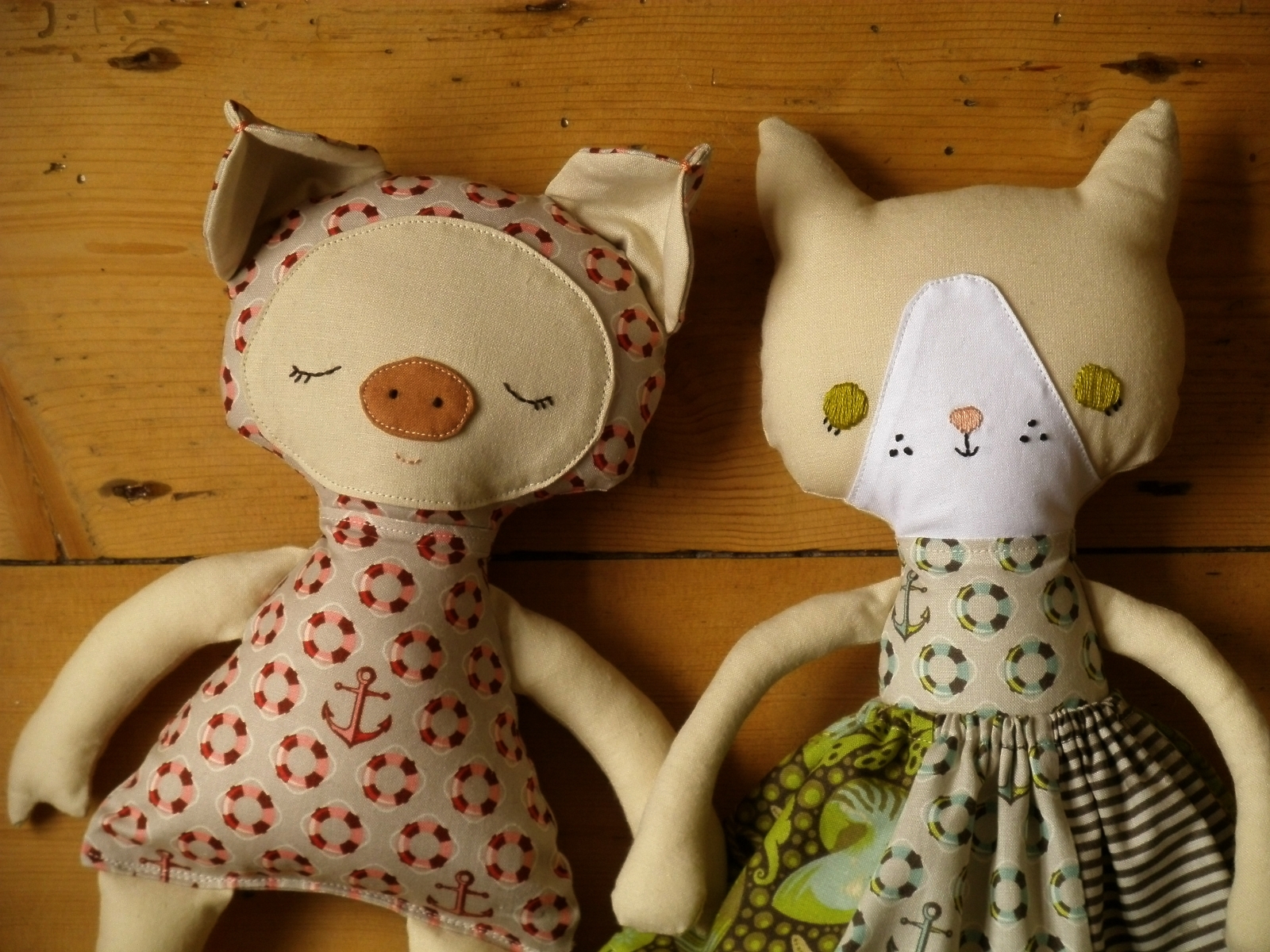 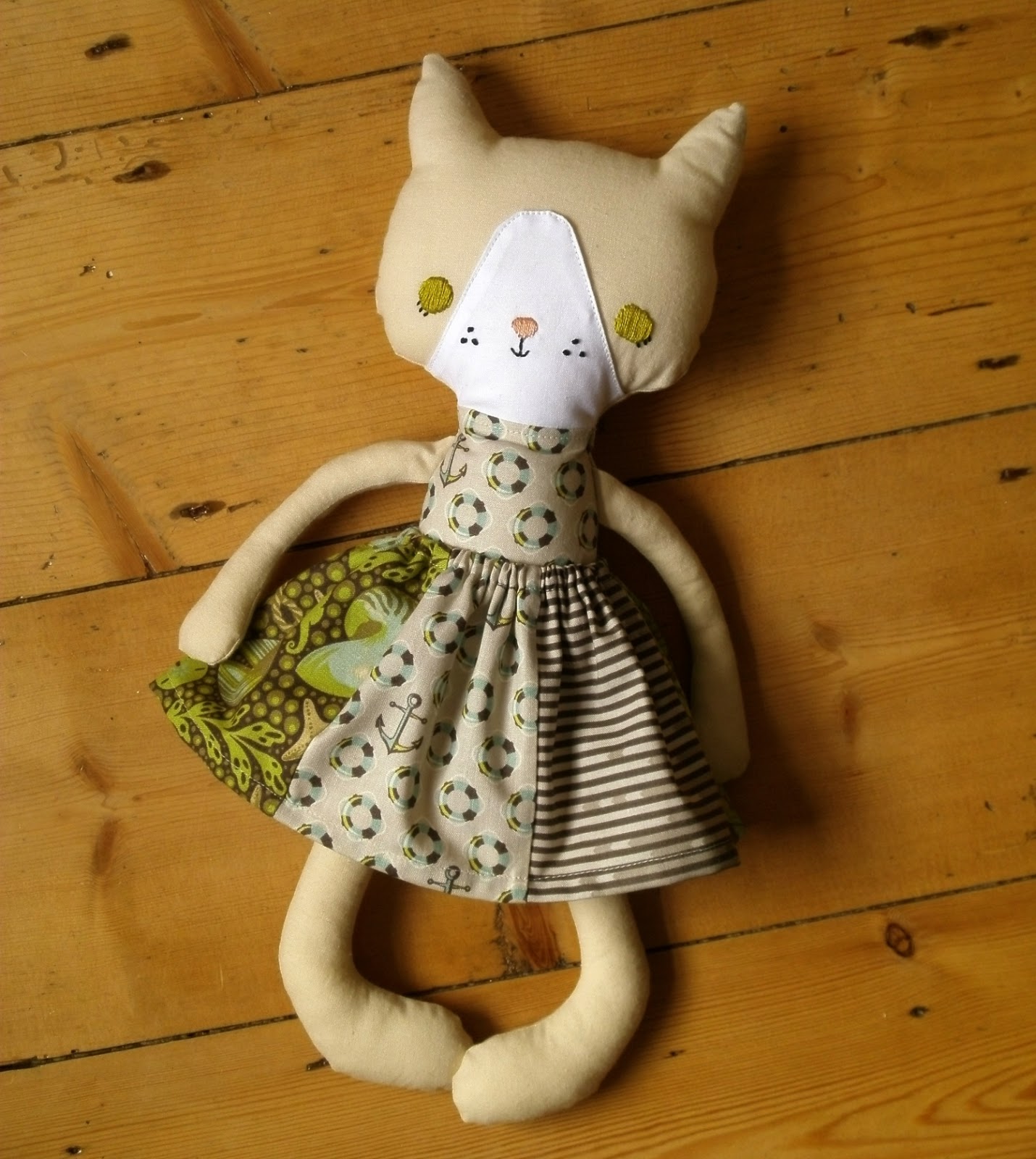 Meowsy Barnacle has been sewn using Bit of Whimsy's Violet pattern in Salt Water fabrics with Moda Bella Solid in natural and white. She has a removable elasticated skirt with properly finished seams and hem. 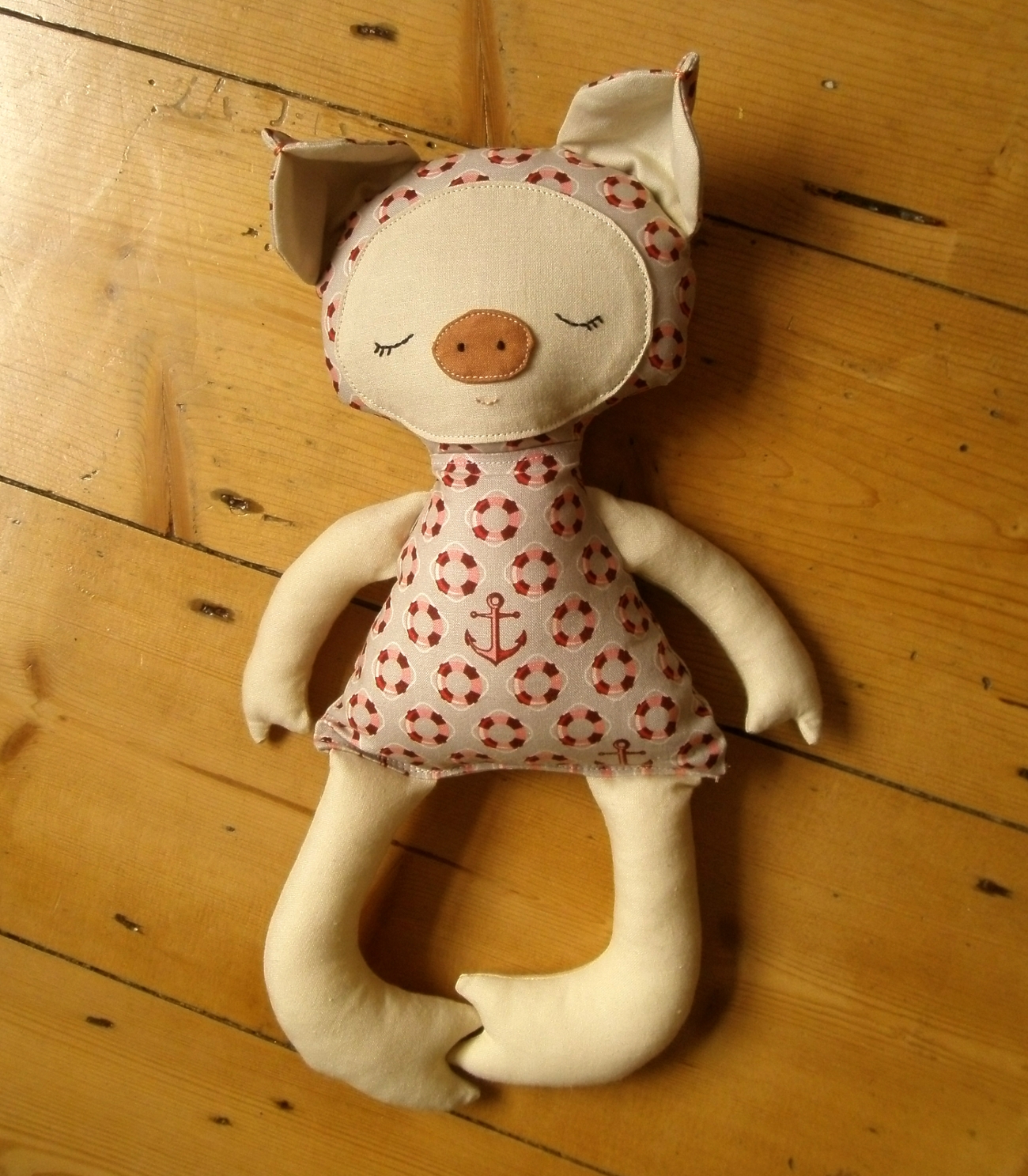 Both Salty Sea Hog and Meowsy Barnacle are available now in my etsy store.
Posted by teacupfaery at 08:42 No comments: